So I've just finished up my second day at GameSoundCon.  I'm a bit exhausted from the experience, but really glad to have been here.  It's really an amazing experience that I think anyone who's interested in thinking about and getting into game audio should attend.

I started the morning with a hands-on Wwise training class.  This was undoubtedly one of the coolest things that I did at the conference.  As a teacher of music technology, I know there's nothing like getting down and dirty with the software to understand how it works.  Led by Robert Brock, the session starts by getting the current version of Wwise and some sounds on a flash drive to install on your laptop.  Then, in an hour, you learn some of the very most basic of the features by giving sounds to a gunshot.  The demo is available on the Wwise site and is called Cube.  This training was great because it's something that I can show to my students.  I'm definitely planning to explore more of the Wwise demos in coming weeks.

After the hands-on training, I headed to a session entitled "Integrating Game Audio with Unity" led by Steve Horowitz and Scott Looney.  This session caught my eye because my engineering friends who teach game development at UM use Unity, so anything I can learn about how sounds work in that engine is of interest.  Several of the examples they discussed came from their book and the corresponding app that goes with it, so I was familiar with them already.  (I haven't reviewed the book yet because I want to play around more with the examples and training first.)  Their session opened my eyes to how much there is to learn in with regard to Unity and sound integration.  The session felt a bit rushed and I was glad to hear that they offer whole day long courses on the same material.  Hope I can either catch one of those in the future.

Before lunch, I caught a demo of Dolby Atmos which was superb.  When I bring my students to tour the sound facilities in the Duderstadt at UM, one of my recording engineer friends at UM, Dave Greenspan, has been talking to my students for years about the importance of height in sound and mixing.  Atmos is basically that to a huge degree.  Speakers above make an incredible difference in sound and I loved seeing it demoed both in games and movies.  Afterward, I snuck in a bit late to Penka Kouneva's session on budgeting and recording live instruments for games without large budgets.  It was definitely an interesting session with lots of good information-- particularly in her discussion as she surveyed friends/colleagues about how they made music work on tight budgets.

Not only does Brian Schmidt do an amazing job of coordinating this entire event, but he gives a great talk as well.  I'm so fortunate that he was one of the first people who I came in contact with when I started my game audio journey years ago.  Thanks Brian for finding me on my blog!  His talk on Casual/Mobile games was informative with lots of details I can share with my students.

Probably my favorite part of today (aside from the raffle where I won a GameSoundCon t-shirt) were the roundtable discussions at the end of the day.  The first roundtable discussion was with composers Garry Schyman, Austin Wintory, Adam Gubman, and Tom Salta.  The second was with audio directors Paul Lipson, Guy Whitmore, and Steve Horowitz.  I thought I'd just jot down a few of their quotes that I found most interesting in the chat.  I've got a ton more than it's useful to share here, so these are just a few highlights.

First, here's a picture I took from my seat during the composers' roundtable. 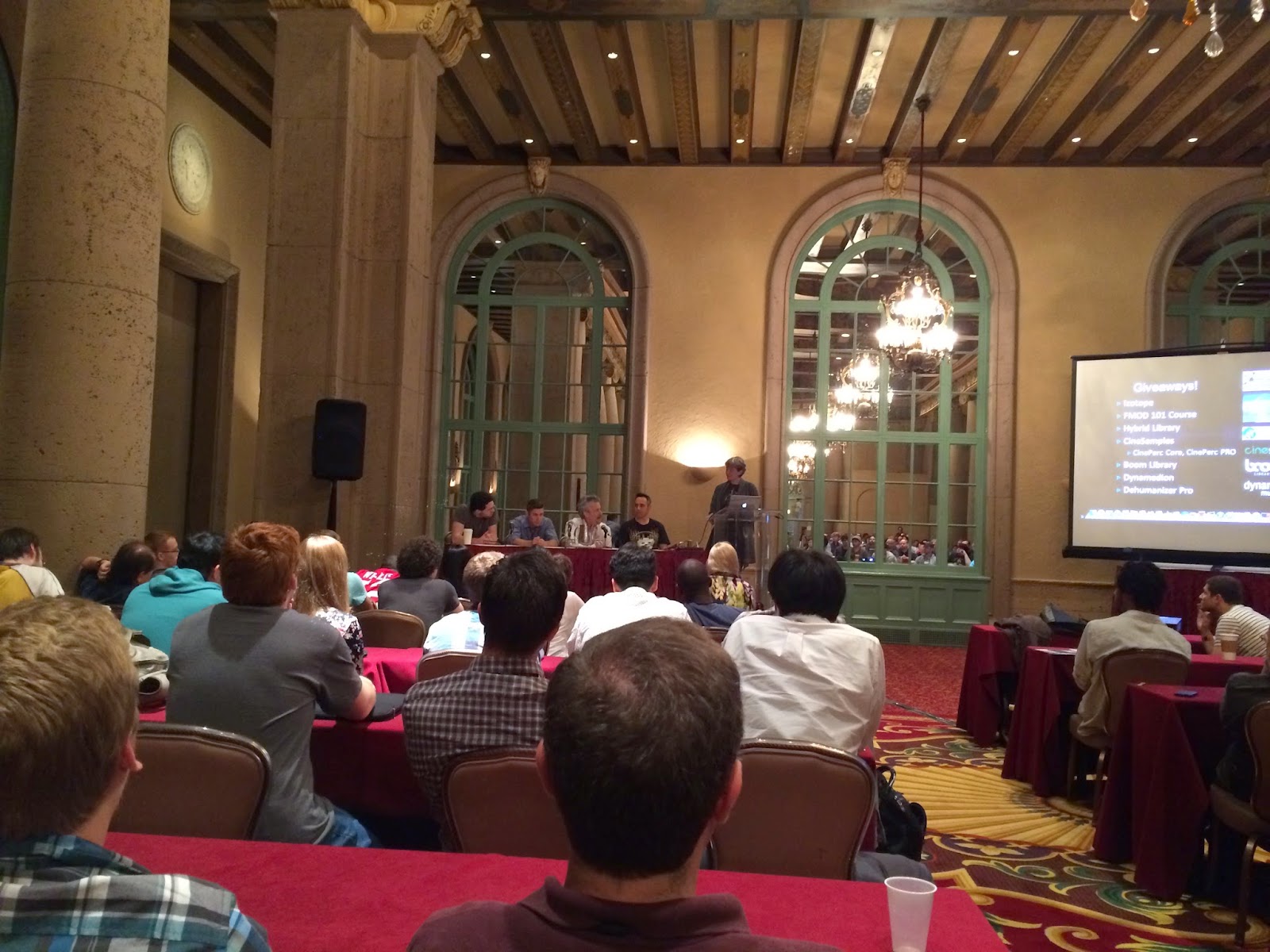 "Writing the first note is the biggest challenge."  -- Adam Gubman

"The industry is like this convention: everyone sharing a space together.  It's about relationships.  Contribute to the community.  The industry is accommodating to all different personalities and skill sets.  Find your place in it.  Be authentically yourself."  --Austin Wintory

"We need to break the freelance gap-- and by this I mean that freelance workers don't see the game.  I don't hire composers who don't deliver their material in Wwise or otherwise implemented."  -- Guy Whitmore

"If you're thinking of getting into the industry, do some research: what's a company where you'd like to work?  What kind of titles would you like to work on?  What languages and software do they use? What does their music sound like?"  -- Steve Horowitz


In this second picture, you can see George Sanger, Michael Csurics, and Marty O'Donnell just in front of me enjoying martinis as they take in the audio director roundtable discussion.  Wish I'd thought to get one during the break between the discussions! 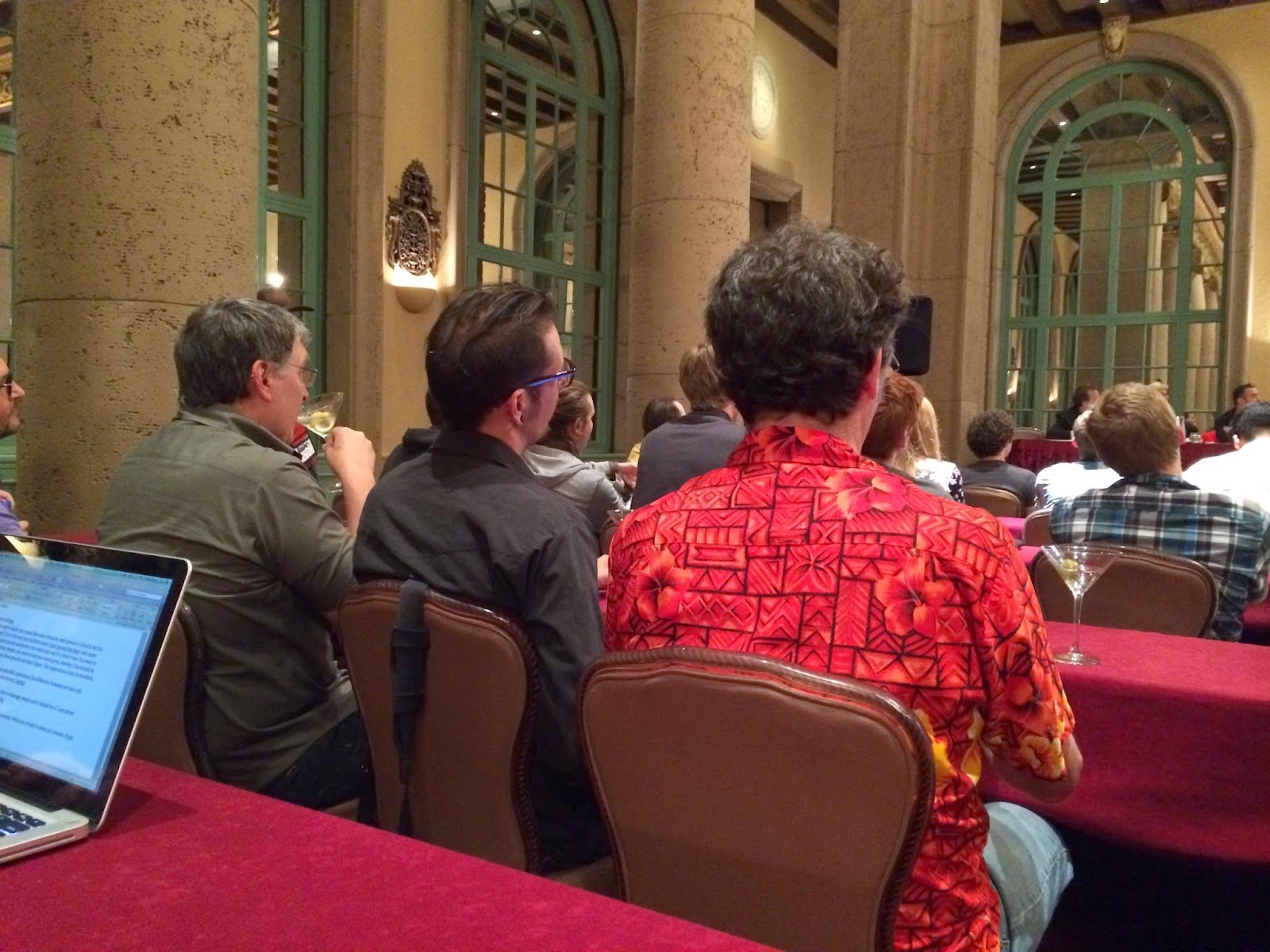 All in all, I have to say GameSoundCon was incredible.  The networking is powerful-- meeting others who are thinking and learning and interested in what you are.  I definitely refined some of my thinking about game audio and got some awesome hands-on knowledge.  The knowledge wasn't earth shattering for me, probably because I've read and studied so much about game audio so far.  However, I'd definitely recommend GameSoundCon to anyone who is interested in game audio as an early step toward learning more and meeting folks working in the trenches.  I'll suggest to my students that they attend GSC for as long as I teach video game music!
Posted by Matthew Thompson at 1:02 AM